Winter Walks Along the Trail 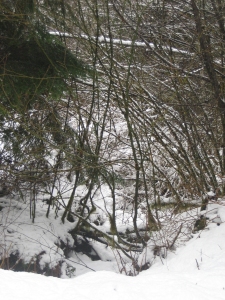 In case there was concern that I had forgotten how to take photographs or that I had a page devoted to them, rest assured I have not. The pace of my photo-taking had slowed as the snow piled higher. However there was a day or two safe enough to venture out along the familiar path.

Easily distracted by anything aquatic, the frozen ice exposed where the puddles once were caught my eye in terms of ‘suspended glass aground.’  The frozen twigs were just as fascinating as was the current state of the pond.

The Bend in the Trail is a perfect spot to take a picture and might come up again in another time and season. As for the fallen trees on the other side of the path, they reminded me of the children’s game – pick-up sticks.

I will have to venture out onto a new trail and when I do, I will be sure to take plenty of pictures along the way. 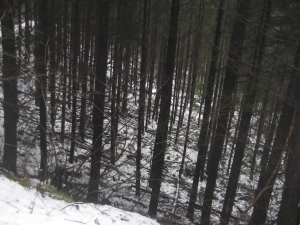 Winter Bend in the Trail by Tommia Wright