One of the reasons why this movement of madness began was for the sake of accountability. Whether attempting a NaBloPoMo challenge, finding organization to photos taken or unearthing/revealing ramblings and other writings or just some other form of nonsense, I mean insanity, the deal with this digital diary was productivity and accountability.

On this page or linked within are the various ‘homework assignments’ I failed to turn in…. 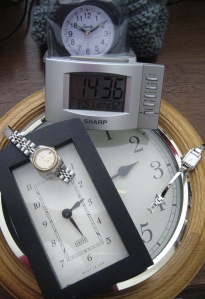 Some Sense of Time

It was time to clean out the safe, Russell thought with shoebox in one hand, garbage bag in the other. Why his sister couldn’t pull herself away from work to help was beyond him. Then again, she was always beyond him.

He remembered the combination, surprisingly, considering it had been years since he accessed the contents to update his mother’s will. His sister had beaten him that task; papers of any value were whisked away to be interpreted and manipulated by her lawyers.

Russell didn’t care, not for the materialistic things. His mother was secure, free to continue living in the small, two-story house the children were raised in.

The first things he removed were the watches. Of course his sister would leave them, not seeing their value. Good, he thought, timeless treasure for him, pun intended.

First was his father’s last watch. Like the patriarch, solid, square, numbers etched plainly, no flair. The leather band softened over time, the rust-color minimizing the gold lines bordering the pale face. Russell saw his father – fair hair gone gray, ruddy face from refusing to give up gardening; lines of life’s experiences etched in his face. The quiet man died too soon.

The second watch, by contrast, glittered with gems, all of them fake, arranged in a floral pattern around the pearl face, dark numbers designed like calligraphy. The bracelet consisted of four brackets that clasped around a small wrist. This was his mother’s. Well, her first watch from her aunt when his mother was little. Like her, the watch belonged as part of a stage in a multi-act play full of vibrant life, brief moments of dark, and no shortage of humor – a shining star throughout it all.

The third watch was from Russell’s only child. Bought with hard earned money – coins once filling porcelain piggy bank, the sports-themed watch had a plastic cover with the team’s logo on top, a small digital readout box underneath that had long since gone dark, like the plastic face and band. Russell thought he had lost it. Not this time.

In the backseat of the car, Eleanor Parker slept between the scattered collection of crayons, stickers and baseball cards; her sketchbook – filled with symbols from various teams, Arizona Diamondbacks included – precariously balanced on her lap. She had no single favorites – every team was a good team; every mascot nice, every player her favorite.

Russell felt a tinge of guilt in having to wake her up as he pulled into the parking lot of the stadium. Spring training was in session and he hoped that the three of them might catch a game inside, not caring which teams were playing. Thankfully, Russell’s wife, Michaela, agreed to the detour.

He was raised with Minnesota Twins; Michaela believing in the Angels no matter the rest of the name. Whenever the teams played against each other, Eleanor Parker knew better than to be in the living room with them. Today would be a different story.

Russell carried Eleanor Parker on his shoulders as they wove in and about the concourse. The roar of the crowds, the cheers and jeers from those gathered by the bullpens; the vendors calling out their wares – it was music, pure and simple, interludes to a symphony in nine parts. Baseball glove gripped firmly in small hands, cap askew, she took great delight in pointing out all of the statues and rattling off statistics of all she knew.

Lunch consisted of hot dogs, soda and potato chips. No matter how much advice the young all-team fan gave, her parents could never make a hot dog taste the same at home. That became one of her ‘determined facts’- ballpark hot dogs could only be eaten in a ballpark.

By game’s end, and new baseball one hand, coloring book and trading cards in the other, Eleanor Parker had enough to keep her occupied during the next leg of the drive to Tracy.

Eleanor Parker remained in her room while her parents fought downstairs, her window open because it was warm outside. Every trip ended the same way. It didn’t matter with Tracy was first; the drive to the second was always the worst.

“I remember you saying that you loved Wyoming,” Russell said, the slamming of pots and pans heard. “It was centrally located to both of our families and it was a compromise we both agreed to when-.”

Michaela paced on the patio outside; Eleanor Parker smelling the nasty smoke from the cigarettes. “I’d be more inclined to believe you if I didn’t feel manipulated or lied to! Cheyenne? Why not someplace with life that has nothing to do with farming or-?”

Metal utensils rattled on the floor. “I’m trying, darn it! Trying to make it work for this family without any handouts from your-!”

“You know what, Russell? I’m not ashamed taking my parents’ offer to-.” Something fell off the barbeque that made Eleanor Parker go to the window. Her mother reminded her of one of her classmates when he threw a temper tantrum. Her father stepped out to join her, his voice not as loud as before.

“So? I remember you saying that you didn’t want anything from your ‘silver platter set life!’ You said, and I quote-.”

Michaela pulled away, flicking the cigarette in Russell’s direction. “Oh, I forgot how you love to throw my words back at me!  When are you ever going to learn not to listen to what I say and listen to what I’m not saying?”

Russell squashed the remainder of the cancer stick into the grass before stooping down to pick it up. “I lost my job when the mill closed and you said ‘we’d make it together. Was that something I wasn’t supposed to hear or did I not hear something in that statement? I’m taking whatever work I can find, Michaela! We don’t have collectors knocking on our door yet and I intend to keep it that way.”

Eleanor Parker watched as her mother walked towards the driveway. “Come back to me to California. My parents can set you up with the right people, to find a real, meaningful job.”

Her father’s laugh sounded like a cry to her ears. “I can’t give you up, Michaela, but I certainly can’t live in that fenced community your parents prefer. Voluntarily wearing a noose around my neck, walking around with puppet strings? I can’t do it.”

“My heart says you don’t want to even if it was for the best for our daughter’s sake.”

Eleanor Parker moved back from the window, feeling her parents’ eyes looking her direction. She didn’t like Tracy, California either. There were too many rules to follow, so few things to do and touch and explore. Not like her dad’s parents’ house in Tracy, Minnesota.

Her father’s voice sounded different. “My soul says material things, status and other nonsense only weigh you down, dear. What happened to simplicity and-?”

Her mother’s sounded more like one of the cartoon characters when they got angry. “My mother says I should have left you before Eleanor Parker was born. What if I just-?”

“By day, your mother’s an angel. By night, she’s the devil in the flesh. She is not in charge of this family, Michaela.”

“By night you want to call it quits, as if you really are living the life of a farmer! Pathetic, I tell you.” Eleanor Parker could hear her mother kicking the soccer ball along the backyard fence. “Never mind I want to go out, have fun, maybe socialize with those who matter. Not you, though, because you don’t care, because you-.”

The young girl chanced looking out the window once more. She watched as her father stopped the ball with his foot, taking her mother by the hand.

“I remember we met in the library, when all was quiet, the room bathed in unlikely sunlight. You had a hard time finding a book. We looked together; found it and made it a point to meet there every chance we had. Simplicity with a bright future ahead. You really want to throw all of that away now?”

Eleanor Parker didn’t want to hear the answer, retreating to the far side of the room, in the safe company of her stuffed animals.