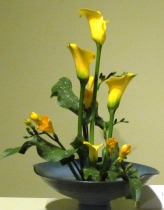 Artwork by Rosita Romero at the SAM

Today’s ficlet fragment started off with the FFF challenge from One Minute Writer. Then I realized Sylvia didn’t interest me as much as I thought she might.

Had thought about a segment from Quietus: Quintets Demise, but had nothing proper. If you wish to go for something completely random for the ficlet, there’s the assorted fragments from this month’s Camp NaNo challenge. Instead, this is the direction my Muse took:

Sylvia suffered in silence, separating stuff from what she only wanted on her portable desk – three colored sheets of paper, a book and three sharpened pencils. That’s what Dora thought when she saw the skinny lady slouching in the science section, staring down at scribbles made in a sketchbook, a smaller version of the big yellow flower acting as a shield.

The child tightened her hold on her dad’s hand – the way she got him to look at her. Pointing, to the person in the corner, she pouted. Her dad shook his head, lifting her to his lap, a book about music in his other hand. Dora knew it was her turn to read – it was always her turn to read out loud. But she didn’t want to today, not with Sad Sylvia still there, now staring at them.

Dora decided to play her favorite game, to see if maybe Sad Sylvia might smile, to see if maybe she could win the silly game today. Dora placed her hand over her dad’s heart, and then pretended to yell. She made up words and pretended to sing. She stumbled over the words of a song Nana played on the record player. She even tried to say the words her Aunt Heloise said – words that Grampa said deserved soap.

Tired and empty of any other words to pretend-scream, Dora covered her face then fell forward against her dad’s soft cardigan sweater, a faint smell of coffee and black toast still there because Grampa burned breakfast – again.

Dora closed her eyes, waiting for this part of the game – her favorite, and tried not to count ahead.

Someone charged at them, a meanie Dora recognized from their walks through the park. Before she could get down to kick him, her dad held her close, covering her ear with his hand, pressing the other ear against his sweater. It must have been bad if he wouldn’t let her hear for him. She couldn’t even turn to read his lips.

From behind the big sculpture of yellow flowers (Dora’s favorite), Sad Sylvia stood, hands on her hips and glared at the meanie yelling at Dora’s dad. Even though the meanie was bigger, he walked away. Dora squirmed and saw her dad thank Brave Sylvia.

Dora gasped when she saw Sylvia sign something back, speaking to Dora as she did so. “From discord, find harmony.”

Curious, Dora asked about the scribbling in Sylvia’s book. The child was surprised to see that it was them, reading by the big flower.

Like Loading...
This entry was posted in Blogging from A to Z, Ficlet/Fragment and tagged blogging from a to z, ficlet, short fiction. Bookmark the permalink.