Even though the weather’s nice outside for a proper walk outdoors, figured it was time to return to Tiny Town.

The journey began at the gate, $10 passage to walk, another $5 for the train (declined). The space for the money collecting was crammed with souvenirs such as wooden whistles, toy trains and other odds and ends that would surely make for a saner segment on the road trip ahead or the return home. In my case, the advantage of wandering solo is not having to worry about losing or entertaining anyone, but I digress. 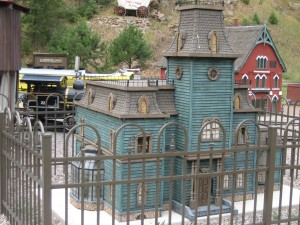 This was the first house seen upon entry and I was floored by the details of it all. Zooming in to the small window on the left, Wednesday Addams could be seen with doll in hand. Had I been thinking, I would have tried to take more photos of this mansion, but I was too in awe. The following photos are in no particular order, like the wandering walk that day.

The reproduction of the Denver Fire Station #1 included fire engines inside and equal attention to detail on the unseen side. The small brown building is Donna’s Place. 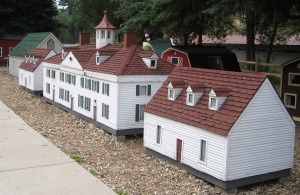 Row of White by Tommia Wright

I didn’t properly note the name of these structures. What was fun, again, was peering inside the windows to see the details within.

If you peer closely enough, you’ll see a couple of cars parked on the other side of the gas pumps at the corner station. Peggy Puddin’s Pharmacy is closed on the left, a blue dog keeping watch. Pine Rest Grocery Co. has few wares, rooms above for rent and pool tables to the right.

There are more photos from this detour, some found, some yet to be found, but all will be shared in part. Thanks for joining me on this walk.

What town/destination could you get yourself lost in?