Thoughts Along the Trail

They say the early bird gets the worm. Well, the early riser gets to enjoy a morning walk!

There is something to be said for the sanity of a regular routine. This past week has allowed me to (almost) daily relish the regular walks again and what a breath of fresh air that has become!

Then again, it could be something as simple as getting the same number of hours of sleep each night. Or the fact that I’ve taken the plunge in trying new challenges. Or the fact that I had fun playing in Portland with friends (still working on assembling that post). 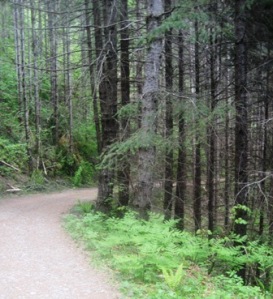 ’round the Bend by Tommia Wright

A kind friend sends me daily verses, and I’ve my daily subscriptions of short reads to ponder shortly after sunrise. I take these words and ponder them step by step. Sometimes I can get a deeper meaning from them. Sometimes I get confounded. But these words are easier to ponder than what’s on the daily radio talk shows or so-called morning news shows.

Not that I wish to remain like an ostrich with my head in the sand, but some things are not needed to start the day – or evening for that matter. One wise friend told me the news, as it is defined by today’s broadcasts, is a bitter tainting that blinds one from the beauty and good news that does exist. I agree.

Sights such as this could be missed if I chose to wait until the last possible moment to get up for the day. Instead, I had the fortune to wake up, walk out and take in the scents and sounds of the morning unadulterated by modern madness.

My friend’s daily send just arrived after my walk ended, yet it’s fitting, I think: “In their hearts humans plan their course, but the Lord establishes their steps.” Proverbs 16:9.

Like Loading...
This entry was posted in Mischief, Anything, Yammering and tagged nature, sunrise, trails, walks. Bookmark the permalink.

3 Responses to Thoughts Along the Trail