Going to the Google homepage today led to a fun discovery: Robert Moog’s 78th birthday remembered with an interactive synthesizer. A link to a Christian Science Monitor article led to clips and ‘notes’ on how to play some of the popular songs of the 70’s and 80’s.

What does this have to do with today’s photo choice? Not much except that a lesson was learned in trying to capture something always moving. 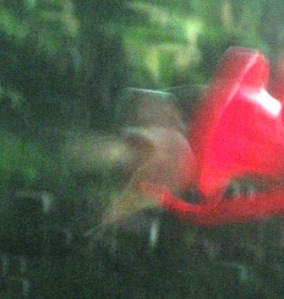 Trying to get a snapshot of my breakfast companion proved…blurry at best, very ill-timed at worst. Might have to try a different means of framing this shot.

In regards to the Interactive-Moog Google logo, the notes sounded just as off-kilter. Adjust a knob or two the wrong way and oy vey.